Brought to you by Total Group

In May 2015, the Wi-Fi Alliance certified the new wireless standard 802.11ac, which will see this technology being rolled out and installed as standard across all wireless devices such as routers, access points, laptops, tablets and smartphones.

Before this, the latest wireless devices would have an 802.11n radio installed as certified back in 2009. Previous to this, there was 802.11g, b and a; all of which 802.11ac are backwards compatible with.

Like when any new device or standard is introduced, speed is always one of the main talking points. In theory 802.11ac is capable of up to speeds of 1.3Gbps (1300Mbps) compared to 802.11n maximum speed of 450Mbps. This, in theory, would mean the new wireless standard is up to 3 times quicker than its predecessor but that is not necessarily the case. The figures which are given out are always the maximum but are very rarely actually achieved. Real results would show with wireless 802.11ac you are likely to get closer to 250-300Mbps compared to 50-150Mbps with wireless 802.11n so there is a true increase of around 250%. Both the router or access point and the client will both have to have an 802.11ac radio to benefit from this though.

All of Wireless 802.11ac frequencies are in the 5GHZ spectrum. This has benefits and drawbacks, as the 5GHz spectrum is quieter there is a much reduced risk of interference from other devices and Wi-Fi networks but the signals do not broadcast as far as 2.4Ghz signals. Wireless 802.11n is able to broadcast in the 2.4Ghz and 5Ghz spectrums giving you the best of both worlds.

Another big benefit of 802.11ac is “beamforming”. This is intelligent technology within the antennas which detects where devices are and concentrates data transmission to them rather than sending out equally in all directions. All 802.11ac come with this technology as standard improving throughput and response times. 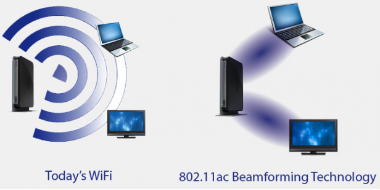 Even if most of the clients are still running the older 802.11n, they will still benefit from 802.11ac routers and access points as they will contain more advanced and powerful hardware. Then, as the clients upgrade, they will also see further improvements from beamforming. Wireless 802.11n will still continue to provide the throughput and technology required for the next few years but 802.11ac should definitely be in the planning and IT budgets. As the amount of mobile users increase the demand on the Wi-Fi network will too, 802.11n will start to struggle, meaning decreased performance for the end user.

Ryan has been a long-serving and integral part of the Wow WiFi network support team, starting as an Apprentice in 2004 and now managing the provision and delivery of our wireless network solutions through a team of six qualified engineers. As a qualified Ruckus WiSE, Cisco and Draytek technician with multiple Wi-Fi installations under his belt, you are in good hands.